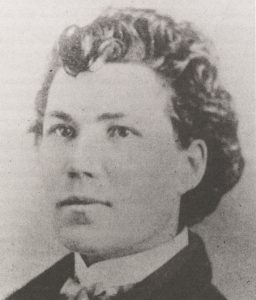 My voice is rushed when I leave a phone message. I’m stressed. Projects are clamoring for attention this week, and nothing makes me more frantic than the words “upcoming deadline.” Yet I’m lucky. The work—revising the novel, starting a local writing group—are endeavors I believe in.

Sarah Edmonds believed so much in supporting the Union side in the Civil War that she disguised herself as a man to be able to fight.

It was not the first time she had to hide her gender. She was born in New Brunswick, Canada to a father who resented his child was not a boy. To escape his abuse and an arranged marriage, she immigrated to the U.S. and disguised herself as a man to support herself. She became a traveling Bible salesman.

In 1861, at the news of President Lincoln’s call for men after the fall of Fort Sumter, she later wrote in her autobiography that it was not her desire:

“to seek my own personal ease and comfort while so much sorrow and distress filled the land. But the great question to be decided, was, what can I do? What part am I to act in this great drama?”

Fittingly for a Bible salesman, she prayed on the matter.

Disguised as a man, she served as a nurse and mail carrier in the Union Army. In her autobiography, she wrote that she also was a spy and crossed the Confederate lines.

In 1863, she contracted malaria. She couldn’t be seen by a doctor, who would realize that this soldier was a woman. She requested a furlough, but was denied. Having no other choice, she became a deserter.

Still she persevered for what she believed in. After she recovered, she worked as a female nurse until the end of the war.

Sarah had the courage of her convictions, which got her through some challenging times. My project deadlines? In perspective, they’re not that difficult.