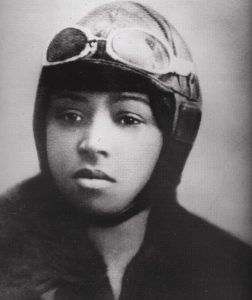 “Awesome,” bellows a woman. I had just confided that her former university had published my first two books, and it changed my life.

Bessie Coleman was a daring pilot, the first African American woman to have a flying license. She was fearless and determined. But like all of us, she needed encouragement.

Bessie was the tenth of thirteen children. Her parents were sharecroppers, barely eking out a living. She walked to a one-room schoolhouse located 4 miles away. In college, she lasted only one term before running out of money.

She went to Chicago to live with her brother and worked as a manicurist and beautician. It wasn’t enough for her. She wanted to “amount to something.”

Her brother taunted her that French women did something she could never do: fly a plane. It spurred Bessie on, but she was an African American woman in a country where discrimination was rampant. No flying schools in the U.S. would take her. No one would teach her to fly.

Robert Abbott, owner of a Chicago newspaper, told her to go learn to fly in France. He opened up the door to a whole new world for her.

She helped herself by studying French for seven months. She withdrew her savings. Then with some financial support by Abbott and another person, she set off for Paris.

Robert Abbott’s encouragement changed her life. For me, having an academic publisher recognize my passion for history and writing put me on a new path.

We all need encouragement to help us change our life.