“What are you doing tomorrow,” I ask a retired man at a group dinner last Sunday.

“I’m taking my granddaughter to school. Then, later, I’m picking her up after school,” he said.

His contribution means a lot to his daughter. She’s an executive at a local corporation, and she doesn’t need to worry about daycare. She’s lucky.

Women dropping out of the labor force has been cited as one of the major reasons why women don’t earn as much as a men. Some experts claim that they choose to be mothers and be home with their children. If I listen closely, I hear the words: “It’s their own fault they don’t earn as much.”

Sharing responsibility for childcare is nothing new. Even Susan B. Anthony would babysit Elizabeth Cady Stanton’s seven children while Stanton worked on her speeches. Anthony, a former teacher, was childless and still must have been flummoxed at times with what to do with Stanton’s family.

Things need to change in the workplace for women to have wage equality. There’s no doubt of that. But when I hear of a neighbor’s son and wife moving with their newborn 3,000 miles across the county to a place where they know absolutely no one, I wince. It’ll be some time before they can make the ties that will support them.

If you have supportive friends or family…count yourself lucky. 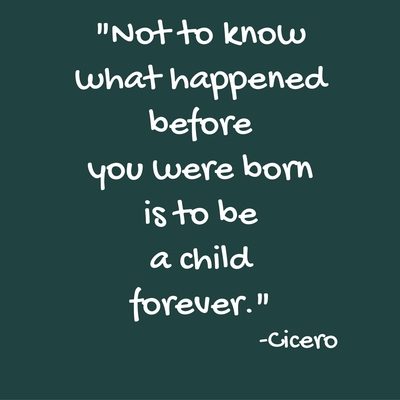 “The more you know about the past, the better you are prepared for the future.”

The man at the microbrewery seemed likeable, and my husband and I were enjoying his conversation. Then the man mentioned moving to a place that sets my teeth on edge. I know the details of this town’s atrocious past.

I mentioned remembering that place’s history. But the stranger said he preferred that the kids who flock to the downtown candy store and swim in the nearby lake not know about the town’s past.

His statement startled me. Does history really matter? I agree that kids need to be emotionally old enough to handle history, particularly difficult events.  But to deny them the knowledge that bad things happened in the past and in their hometown? Isn’t that part of life, the good and the bad?

I personally am enriched by the stories of struggles and losses and triumphs. It tells me that my life is just like others. And I learn that I’m lucky too, for I haven’t experienced the devastating effects of the Great Depression or felt the fearful uncertainty of WW II.

This week on Facebook I posted about Susan B. Anthony, whose family had all their worldly goods up for sale after the economic downturn of 1837, including underclothes and eyeglasses. It must have been overwhelming and embarrassing, and yet it did not stop her.

Susan B. Anthony is one of my heroes.

If we don’t talk about history, how will we know who our villains and heroes are?

The confetti and balloons from the Republican convention are in the dumpster.

But as a biographical fiction writer of ancient and powerful political wives, Melania Trump’s appearance at her key speech still lingers in my mind. Not in a good way.

I haven’t followed her. A few months ago, I read a magazine in an office waiting room, which had an article about “The Donald Nobody Knew.” It so empty of real content that I felt I had eaten a big bag of Doritos. Without the satisfaction of how it tasted going down.

So I didn’t watch Melania Trump’s speech. But I was on the New York Times website when she was giving it, and saw the series of photographs that flashed by. One of them was only on her shoes.

I knew that wasn’t good.

Appearances at a big speech, at least for women who have lots of clothing choices, are symbolic. Melania Trump choices were deliberate. “She was a model, and understands the power of the visual cue,” reported The New York Times.

Her dress was purchased from a Serbian-born designer for $2,190. The puffs at the end of the ¾ length sleeves accented femininity. It was tight, to emphasis a 46-year old slim figure and to display a toned “butt bump” in the back. She exercises.

The dress was white. That’s the symbol of purity, of virginity. A desirable sexual element for some men. In case you missed the cue, she wore the same color again when Donald Trump gave his acceptance speech.

It was the shoes that got me. Stilettos. Higher-than-high heels, not necessary for a tall woman who was a model. “Men are perfectly frank in admitting that high heels stimulate their sexual appetite,” according The Guardian.

What was symbolized in the appearance of Melania Trump on a national stage last week?

That a woman’s sexual desirably is primo. And that we have taken a couple of steps backwards.

I frequently visit a women’s restroom in a prestigious downtown building. It’s an inside room with poor ventilation. Many times I’ve complained to myself about the smells that linger for hours.

The Ancient Romans put up with worse. If the house had a “toilet,” it was more of an outhouse attached to the kitchen than today’s modern bathroom. Some scholars speculate that in large houses, the hole in the closet-sized space in the back of the house was only for slaves. The wealthy used a chamber pot. Even so, it would take time—and leave a smell—before some slave whisked it away.

Pooping outdoors in the city was commonplace by the amount of graffiti devoted to warning people not to do it. In Pompeii, on the walls lining a small street near the amphitheater, are large letters screaming. “Sh#tter, beware of misfortune.”

A lengthier curse is found in Rome. “Anyone who urinates or defecates here, may he incur the wrath of the twelve gods and also both Diana and Jupiter the Best and Greatest.”

They must have had quite the problem to involve a curse like that. So did people defecate where there was no warning?

The people of Pompeii created about 1,000 pounds of excrement a day, according to one scholar. It must have reeked, and there was nothing they could do about it.

I guess I can live with a few minutes of unpleasant smells.

Thanks to Sarah Levin-Richardson’s excellent chapter “Bodily Waste and Boundaries in Pompeian Graffiti” in the book Ancient Obscenities: Their Nature and Use in the Ancient Greek and Roman Worlds. 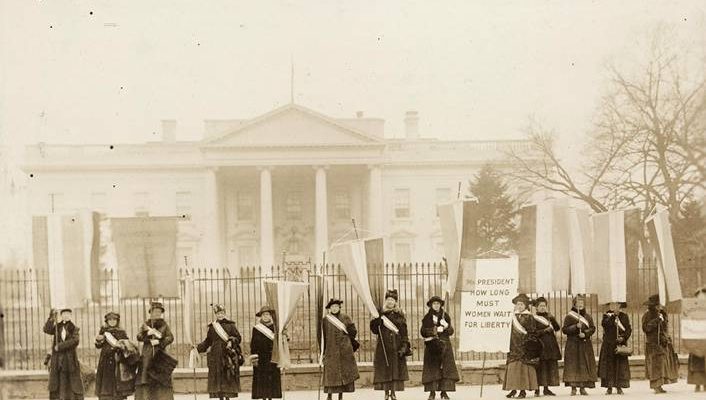 “You have to know the past to understand the present.”

I couldn’t understand the deaths based on race of last week.  How did they happen here?

I’ve traveled around the world and seen some things that are still painful to recall. But not in my nation.

Thinking about the Carl Sagan quote above, I remembered a photograph of women suffrages peacefully standing in front of the White House. Nonviolent protest, that’s what I would research. Years before Martin Luther King said, “Nonviolence is a powerful and just weapon.”

Then I found out about the Night of Terror.

Thirty-three suffragists were arrested for picketing in front of the White House. The women were then brutally tortured.  They chained Lucy Burns to a cell bar above her head and beat her, leaving her there all night. They shoved Dora Lewis into her cell with such force she hit her head on an iron bed frame and fell unconscious. Her cellmate, thinking that Lewis had died, had a heart attack. They grabbed, they choked, they kicked the women, including one 73-year old protester.

This happened to women who were fighting for the right to vote, something I take for granted today. In an effort to advance their beliefs, these women endured torture in my country.

Maybe we have a history of violence but we forget it.

I know we all have ideas about last week’s events. I know I do, even before the investigations are completed. And maybe you and I disagree.

But we can all agree that violence is not the answer. We have violence in our past, but we don’t need it in the present. 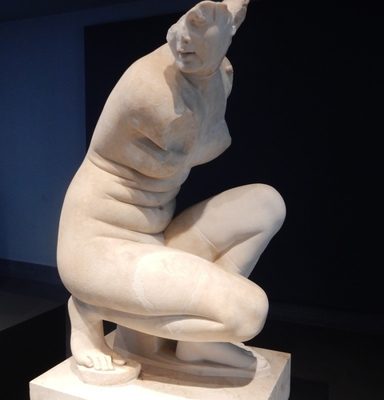 A friend and I were looking at photos of the new curvy Barbie. “Now men want a big backside,” I complained. He responded, “Yes, but they also want a thigh gap.”

Somehow I felt as if I was at McDonald’s, ordering a meal. Yes to the hamburger, no to the fries, yes to the vanilla shake.

As if we could order woman parts to make the perfect body. As if having the right body parts were all that mattered.It’s been that way for a long time.

The preferred body image for a woman in Ancient Rome was fleshy, with a full tummy and breasts. Of course they didn’t have surgery to alter their shapes, so you were stuck with what you were born with. Or, for that full tummy, stuck with your access to food.

Today, with “manscaping,” there’s more pressure on men to look just right, as it was for the Ancient Romans. Back then, as it is today, no fleshy tummy. Muscles were it.

I know we all need to love the shape we have. But it’s easy to pick up negative messages from advertising because it’s all around us. The good thing to know is that it’s always been that way.

For me, that helps.