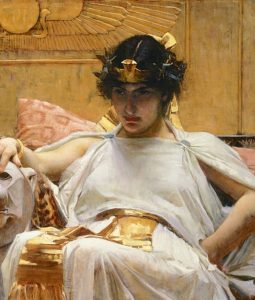 I step around a cluster of women at the gym, each trying to gain attention by wearing as little as possible.

It’s the latest thing at my gym. I wonder what happened to focusing on increasing strength and endurance, not gathering looks from others.

Cleopatra ruled Egypt for 21 years. She knew how to build a fleet, quell an insurrection, and control the money. Despite the male-dominated world, a Roman general praised her political smarts.

Yet our memory of her is largely based on her romance with Julius Caesar and Marc Antony. When Shakespeare wrote his play about her relationship with Marc Anthony, he depicted her as scholar Harold Bloom says “the most seductive woman in all of Shakespeare.”

Today her name is associated with a strip club and a slot machine, both portraying her as a sexual vamp, not a political power.  When I searched the words “Cleopatra” and “sex kitten,” plenty of websites came up with that combination.

It’s okay that women want to show off their bodies. But should this be all those women in my gym focus on? My heart pounds.  A friend  is telling me my career is about to take off.

It’s exciting because finally my writing will be out there. But it’s also scary because my novels will be open to criticism. Writers, who already have a vivid imaginations, can easily imagine the worst.

Anna Howard Shaw campaigned tirelessly for women’s suffrage for over 30 years. She was a great orator. In 1912, when states Arizona, Kansas, and Oregon gave women the right to vote, Anna spoke at the major cities in all three states, making four or five speeches a day.

She knew how to speak to a crowd from her earlier experience as a minister. Yet after her first time preaching, she could have easily given up her calling. She had been well received by the audience, but the next day her brother-in-law took out a notice in the newspaper:

Her friends and family stating publicly they detesting that she was preaching? She must have been humiliated. But she didn’t let it stop her. She went on to preach 36 times that year.

Yes, I might get some criticism. But I won’t let it stop me. With swelling pride, I honk my horn and give the women a thumbs up. This morning’s drive took me past four schools where teachers, predominantly women, are on strike. As a teacher for eight years, I know it’s a hard job. Teachers don’t get paid enough, and now many in local districts are on strike.

Rose Schneiderman knew the importance of striking. Her mother, a struggling widow in New York City with four children, fed her family with charity food baskets. In 1895, Schneiderman left school at age 13 to earn money.

In 1903, while working in abysmal conditions at a factory, 21-year-old Schneiderman and a partner applied for a charter from the United Cloth and Cap Makers Union. Leaders told them to organize 25 women. They did it within days.

Schneiderman was an organizer of what was at the time the largest strike of American women, the “Uprising of 20,000.” In November, 1909, Jewish women in their teens and early twenties went on strike for eleven weeks. They were protesting terrible wages, long working days, and horrible conditions at shirtwaist factories.

The women had to be strong. In one month, the police arrested 723 people, with 19 sentenced to the workhouse. The average bail was a $2,500, a significant amount at the time. Even a 10 year old was sentenced without testimony to five days in the workhouse for allegedly assaulting a strike-breaker.

The women were victorious, for most companies signed contracts with benefits including a standard work week of 52 hours with four paid holidays per year.

Schneiderman later became friends with Eleanor Roosevelt and was the only woman on President Franklin Roosevelt’s Labor Advisory Board. She played a key role in shaping labor laws in industries which had predominately women.

Schneiderman knew that striking is unpleasant work. Sometimes, though, it’s the only way you change things.

Tears spring to my eyes. I’m drinking my morning coffee at 5:00 am, scanning the obituaries in the New York Times. There’s one of a 46-year-old British woman.  Her life blows me away.

As a girl, Hilary Lister played rugby and hockey, but noticed pain in her knees when she was a teenager. Doctors puzzled over her diagnosis, and by age 17 she was in a wheelchair. Ten years later, she was immobile from the neck down, in almost constant pain.

Yet she didn’t want to spend all her time on a couch. When she went sailing with a friend, she found a whole new life. “I was out in the middle of the lake, and I had the sensation of movement. It was as if I was free.”

Lister learned to operate a specially outfitted sailboat by sipping and blowing into straws that moved the tiller and worked the sails. Because she had to be strapped in, there was always a possibility that her sailboat would capsize and she would drown.

Conditions for sailing were harder for her than most people. Heat and cold were serious concerns. She could not relieve herself for hours at a time. While sailing she still experienced pain from her condition.

She sailed until a year and a half ago, stopping only because her illness became too overwhelming.

Lister died this past Saturday. I’ll never forget her. I love books. When I was a kid, I’d spend my allowance on books, scanning the shelves weekly in a beloved used bookstore. I now have over 3,500 books in my bookcase-lined office.

I especially love my Oregon history books which ended up sparking the cozy mystery series, Murder by Words, set in a small Oregon Coastal town.