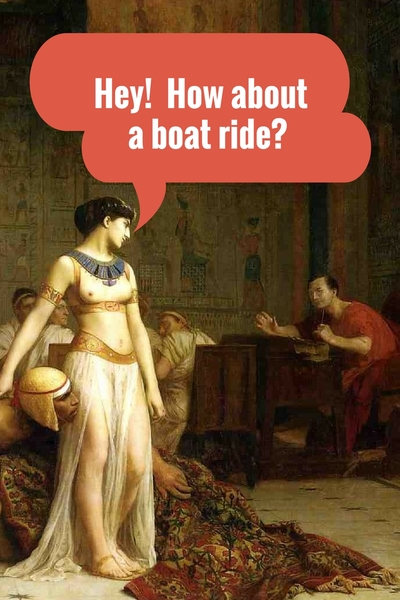 I changed my hair to fluffy curls last week and the compliments rained down on me.  Gee, I thought I was good-lookin’ with straight hair.

Studies show that good-lookin’ people get better service, faster promotions, and whole bunch of other goodies just because they’re attractive. I never thought that was fair.

Still, though, when it comes to our strong women in history, do they have to be good-lookin’ too?

Take Cleopatra, for instance. Every movie star who ever played her was attractive, including the violet-eyed Elizabeth Taylor.

Roman historian Cassius Dio described Cleopatra as “a woman of surpassing beauty” who was “brilliant to look upon.”

But writing more than a century earlier, Greek historian Plutarch said “her beauty… was in itself not altogether incomparable, nor such as to strike those who saw her.”

In other words, Plutarch is saying she was kinda plain.

We think that since Cleopatra had amorous relationships with two powerful men, Julius Caesar and Marc Anthony, she must have been good-lookin’.

What if she wasn’t? What if she had a lot of other things that made her attractive? Like wit, charm, and smarts?

Not  good-lookin’.  But smart.

A 124-year-old Jewish cemetery in Missouri was vandalized this past weekend. The attackers overturned about 170 grave markers, pushing them off their bases.  The motive is unknown until the culprits are arrested, but we can certainly guess.

We have a long history of desecrating the place of the dead to make a statement for the living. Even in Ancient Egypt, not long after Queen Hatshepsut died, her mortuary temple was vandalized.

Hatshepsut ruled Egypt with her stepson Tuthmosis, who was a baby when she started her reign. She did good things for Egypt, including building magnificent temples and masterminding a highly profitable trade with another land.

After she died, Tuthmosis ordered workers to attack her monuments and to drag down and smash her statutes, all with the intent to obliterate her image. Why? The motive may have been that he wanted to erase the memory of a successful woman pharaoh in order to make his own reign look good. That’s a rotten reason, in my opinion.

Sure, the dead may not care about desecration, but a destructive act is meant for the living.

I loved watching Perry Mason on television. Suave, cool, and kind, he was the master of outfoxing his competition. One scene I distinctly remember is when Perry Mason was sitting at a restaurant table and Hamilton Burger, the blustery district attorney, stops by and demands an answer from Perry. Back in the day when you could smoke inside, Perry took out a cigarette, flicked open his lighter, inhaled deeply, and then answered. Burger called him out on it. The cigarette was a delay for Perry to think of his answer.

Is this small delay only for fictional characters? No, Queen Elizabeth I did it too. She was brilliant and could understand complex situations, but she knew when to slow down the conversation. The French ambassador was negotiating with the Queen but she made their conversation stray off topic. One comment the Queen kept adding was how hard it must be for the ambassador because he had to work “with old women such as I.”

Was this a woman easily distracted, a sign of aging? Not so. The French ambassador realized that this Queen was deliberately slowing down the conversation. She was giving herself time to think. She was luring him into a false sense of security, to make him think he was negotiating with a doddering older woman.  Instead, it was for England, part of shrewd negotiations.

The French ambassador admired the Queen for it. He wrote, “She is a very great princess.” And while we may not have such nation-involving conversations every day, we do work, we deal with clients, we all have difficult conversations. We demand of ourselves that we be quick on our feet in conversations. But we don’t have to be.

Sometimes it’s best to sloooow down the conversation.

Source: Alan Axelrod’s Elizabeth I CEO: Strategic Lessons from the Leader Who Built An Empire

The twenty-something bartender, her long hair dyed blonde, wore very short shorts last Friday during the warm weather. Men of varying ages were glued to the bar, doing nothing more to do than drink beer and catch a glimpse of skin. Although I have flashed a bit of cleavage in my time, I’m more deliberate now on how I dress. I don’t know what the men in the bar thought of me, or even if they ever peeled their eyes off the bartender for a moment. Nor did I care.

How important is physical beauty?

Cleopatra would not be one who captured men’s attention by her appearance.  Elizabeth Taylor, with her gorgeous purple eyes, in the 1963 epic Cleopatra, suggested that Cleopatra was more beautiful than most of us.

Plutarch, an ancient historian, writes that Cleopatra was not a great beauty. Her looks were not “as such as to strike those who saw her.” So what made her so attractive?

Cleopatra had something else

Cleopatra had an irresistible charm. As proof of her intelligence, she knew many languages and could speak without an interpreter to Ethiopians, Troglodytes, Hebrews, Arabians, Syrians, Medes or Parthians. She was a hard worker, much more than other kings before her. Cleopatra, who was not Egyptian and came from a Macedonian dynasty. Plutarch states earlier the early Macedonian rulers of Egypt did “not even made an effort to learn the native language.”

Cleopatra had a nose

I’ve seen coins with Cleopatra, and her nose is huge. Maybe it was to suggest she had a “Roman nose,” but I can’t imagine anyone thinking she was good looking.

The popular phrase is that beauty is in the eye of the beholder. I’d add something else to that. The size of Cleopatra’s nose didn’t matter. Intelligence, which gets better with age, influences the eye.