Wild Women of the West 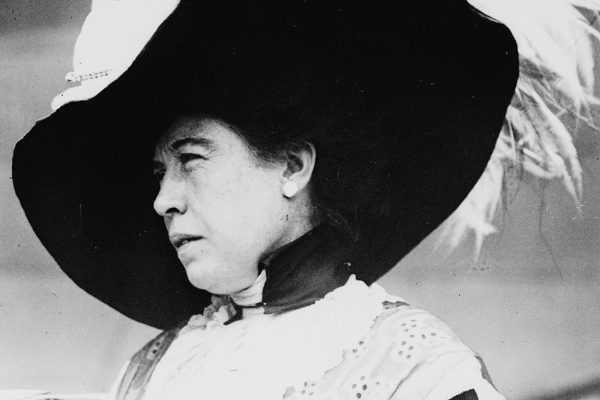 Tears prick my eyes as I write this. I’m thinking of two formidable women in my life, one 88 years old, the other 96 years old. You don’t know these women. They’re not famous. But both have met considerable challenges in their lives and remained compassionate.

Margaret Brown, later known as the “Unsinkable Molly Brown,” also had challenges. She was born to Irish immigrants in Hannibal, Missouri and left school at age 13 to work in a factory. She and her brother followed their dreams to Leadville, Colorado, lured by tales of mining discoveries.

At age 19, she married the 34-year-old J. J. Brown, then a mining engineer. Her husband, while working as a mine superintendent, discovered gold, and the owners rewarded the Browns with a significant amount of shares in their company. They became millionaires.

As a rich woman, Brown could have spent her life in society and have done nothing notable. But that wasn’t who she was. She had worked in soup kitchens in Leadville. When she and J.J. moved to Denver, she joined city reformers to install public baths in the courthouse for the poor and worked to create more public parks.

She was traveling in Europe when she heard her grandson was ill, and she booked the first ship home, the Titanic. On the fateful night of April 14th, 1912, the Titanic struck an iceberg. Brown was hustled into Lifeboat No. 6, built to hold 65 people, but filled with only 21 women, two men, and one boy. According to legend, Brown urged the lifeboat to go back and save more people, but was opposed by a crewman in charge of the lifeboat. She threatened to throw him overboard.

She took an oar and helped row the lifeboat to the passing ship Carpathia, which had diverted its course to rescue survivors. Even while still on board the Carpathia, Brown raised  $10,000 from the Titanic’s wealthy first class survivors to help the poorer second and third class survivors.

Brown once said, “It isn’t who you are, nor what you have, but what you are that counts.”

These two older women in my life may never have heard of Brown’s quote. Nevertheless, what they are is both are strong and compassionate. 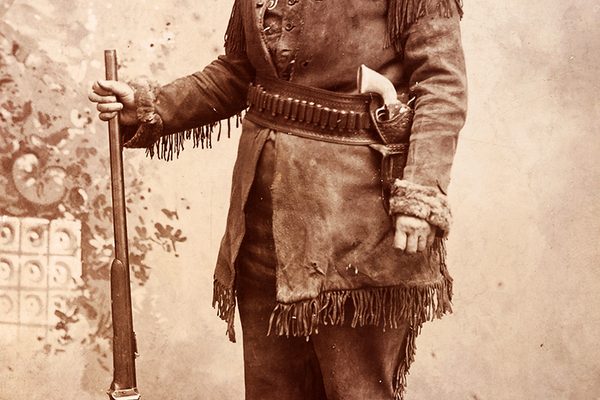 Big, ugly tears run down my cheeks. The images of sad things fill my mind, and I can’t stop crying. An article from Inc. Magazine talks about our need to do “emotional hygiene.” To take some time to be by yourself and be sad. Or angry. Or whatever you need to feel that you’ve been pushing away. The idea is to go towards the emotion, rather than avoid it, so that you can lessen the feeling and make it part of the background, like music in an elevator.

I’m reading two books concurrently about Calamity Jane, American frontierswoman and professional scout. She was a misfit at a time when women were held to rigid standards. She wore men’s clothes. She swore. She drank.

Very little can be proven about Calamity Jane’s life. She spread exaggerated stories about herself. (Even her date of birth is disputed.) We do know that she became an orphan when she was still a young girl, and she took care of five younger brothers and sisters. It was a time when there was no social safety net. To borrow a phrase from Tennessee Williams, she “depended on the kindness of strangers.”

She was a dance hall girl, occasional prostitute, and battered wife. She died at age 53 of inflammation of the bowels, but it was likely chronic alcoholism. She had seen an incredible amount of sorrow in her life, and maybe drinking helped ease her painful emotions.

Luckily we have made scientific advancements in dealing with emotion. I felt better after crying. 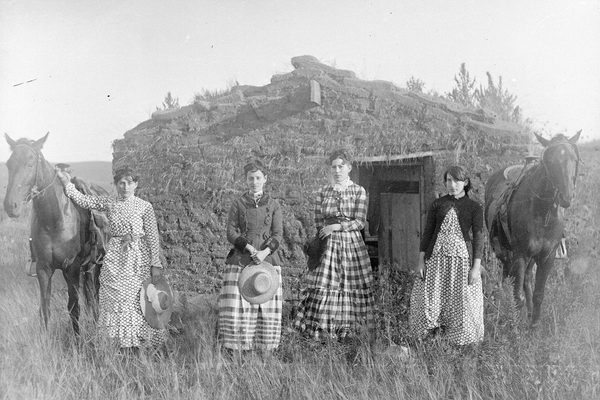 We’re all pretty much the same. That’s one thing I’ve learned from studying the past.

Yesterday I had pictures taken by photographer Kate Singh of Aevum Images. I had my hair and makeup done professionally before the session. A camera does different things to your normal face that makeup can correct.

I wanted to look my best. So did the Chrisman sisters in Nebraska in the late 1880s. Two of the sisters were old enough to make homestead claims.

When they posed for the photographer, they wore their best clothes. They wanted their horses in the photo too.

They posed in front of their house. No, it’s not what we’d call great, but a sod house on the plains was what you lived in at that time.

Don’t forget it wasn’t a man-owned house. This was owned by a woman.

And as we frequently do, no matter how great we look, we wish the camera would show something else.

Ruth is the one on the far right. She was 11 years old when the photograph was taken. She didn’t like the picture. Her hair hung down over her forehead, and she said, “I looked like a horse thief.”

I’ll look at my photos and I’ll wish I looked more…something. But I’ll remember Ruth Chrisman.

She doesn’t look like a horse thief to me. 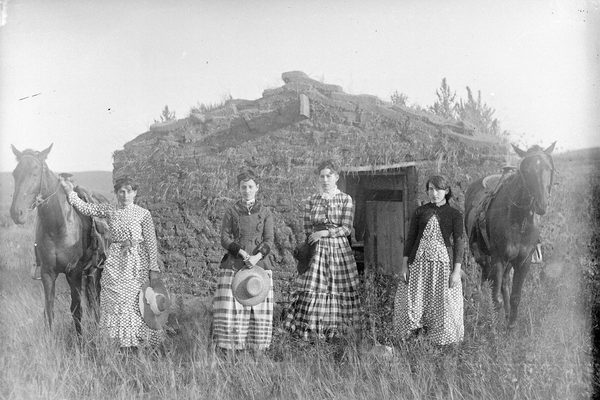 What would you do if you had no other option but to survive?

You’d figure out a way to make it.

That’s what the two Kohl sisters did in 1908 when they came West to seek their fortune. As Edith Eudora Kohl wrote in The Land of Burnt Thigh, if they could live on 160 acres in South Dakota for 8 months and pay the government $1. 25 an acre, they’d own the land. They could then sell it and make some money.

The plan was flawed.

There was a lot of vacant land out in South Dakota. And the “house” they bought on the claim wasn’t a house. It was a tar-paper shack.

After riding a wagon thirty miles from the nearest town, they came to their land and saw nothing but vacant prairie. Miles and miles of it.

The hired driver had to ask them to get off his wagon. It was going to be dark and he had to get back to town.

The one-room shack was about 10 x 12 feet. It had a homemade bunk fastened to the wall, a two-hole oil stove standing on a box, another box for a shelf, and two rickety homemade chairs. That was it.

The sisters pushed their trunk against the lockless door and piled on it the chairs and their suitcases to form a barrier. Then they crawled into the bunk with their clothes still on.

It didn’t look any better when they awoke the next day.

But they survived. They made friends with other women homesteaders and they found jobs that supported them. Edith’s sister eventually got married.

And Edith? She went on to find her fortune in Wyoming.

Thanks to Judy Bartle for recommending the wonderful book The Land of Burnt Thigh. 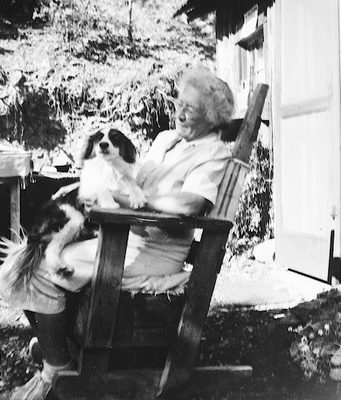 Stella Walthall Patterson did just that in 1946. She moved into a remote cabin in the wilds of the Siskiyou Mountains, without electricity or indoor plumbing.

She was 80 when someone told her she had “young legs.” Patterson began to consider what she should do with these young legs. Why hang around, she reasoned, waiting to be carried out feet first?

Why not have some adventure without anyone saying that she was too old?

She moved from San Francisco to a cabin on a mining claim in the mountains overlooking the Klamath River. She brought seeds to plant a garden.

She was hoping for a time alone. The very next day, she encountered two young men who lived in a nearby cabin who worked her mining claim. With a sinking feeling, she saw her hopes of being alone were dashed.

But the two men turned into good friends, and she shared with them the problems of living in a remote area: shooting a cougar, killing a rattlesnake, surviving the flooding river.

When her year was up, she considered returning to San Francisco. Her family pleaded for her to return and promised that they would do many things for her.

She realized she wasn’t needed by her family. But the two men needed her, as did one of the men’s recent wife and their new baby. She was needed where she was.

We need to be needed by someone. We need to make a difference to others.

That can help keep us alive.

Patterson died when she was 90, just weeks before her memoir, “Dear Mad’m,” was published by W. W. Norton & Company. 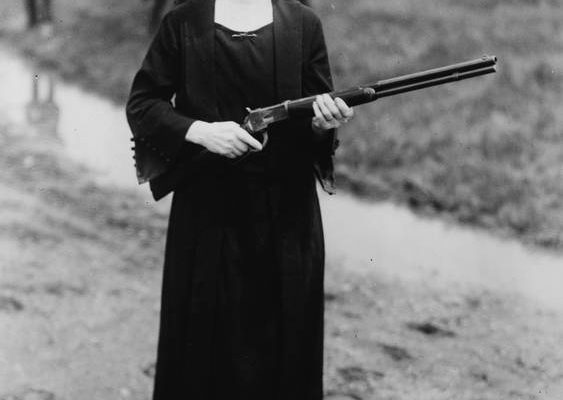 Last week I went to bed at 6:00 pm, feeling as we all sometimes do, beaten up and wanting comfort. My sister called me and informed me that I could rest for a couple of days, but soon I’d have to get up and keep going.  “Think of Annie Oakley,” she said. “She didn’t stay defeated!”

Annie Oakley could shoot off the end of a cigarette held in her husband’s lips. She could hit the thin edge of a playing card from 30 paces. With her back turned and using only a mirror, she could shoot distant targets.  All that took practice. And after a railroad accident in which she was partially paralyzed, it took practice to get her shooting skills back.

Last week I wasn’t in a major accident. My body still functions well. All I have is a heart that’s hurt. Like Annie Oakley, I chose to get up and keep shooting at the target.