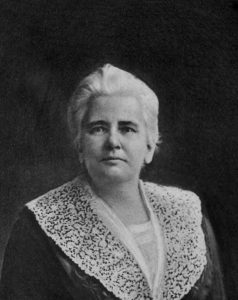 I’ve been paralyzed this week by bad memories, which were supposedly buried in the past but have been stirred up by politics in Washington D.C.

So many other women have felt this way too.

Somehow I get comfort in a story I discovered when researching my earlier blog, “Suffragist Anna Howard Shaw (1847 -1919) Faced Her Critics.” Anna started out as a preacher before she became a suffragist. She had to visit far-flung congregations on her own.

In the summer of 1874, she endured a overnight wagon ride on a desolated route with a strange man. It was just the two of them. Then he started to frighten her.

Anna, in her autobiography The Story of a Pioneer, tells it best:

A man appeared in a two-seated wagon and offered to take me to my destination, I felt that I had to go with him, though I did not like his appearance. He was a huge, muscular person, with a protruding jaw and a singularly evasive eye; but I reflected that his forbidding expression might be due, in part at least, to the prospect of the long night drive through the woods, to which possibly he objected as much as I did.

It was already growing dark when we started, and within a few moments we were out of the little settlement and entering the woods. With me I had a revolver I had long since learned to use, but which I very rarely carried. I had hesitated to bring it now—had even left home without it; and then, impelled by some impulse I never afterward ceased to bless, had returned for it and dropped it into my hand-bag.

I sat on the back seat of the wagon, directly behind the driver, and for a time, as we entered the darkening woods, his great shoulders blotted out all perspective as he drove on in stolid silence. Then, little by little, they disappeared like a rapidly fading negative. The woods were filled with Norway pines, hemlocks, spruce, and tamaracks-great, somber trees that must have shut out the light even on the brightest days. To-night the heavens held no lamps aloft to guide us, and soon the darkness folded around us like a garment. I could see neither the driver nor his horses. I could hear only the sibilant whisper of the trees and the creak of our slow wheels in the rough forest road.

Suddenly the driver began to talk, and at first I was glad to hear the reassuring human tones, for the experience had begun to seem like a bad dream. I replied readily, and at once regretted that I had done so, for the man’s choice of topics was most unpleasant. He began to tell me stories of the stockades—grim stories with horrible details, repeated so fully and with such gusto that I soon realized he was deliberately affronting my ears. I checked him and told him I could not listen to such talk.

He replied with a series of oaths and shocking vulgarities, stopping his horses that he might turn and fling the words into my face. He ended by snarling that I must think him a fool to imagine he did not know the kind of woman I was. What was I doing in that rough country, he demanded, and why was I alone with him in those black woods at night?

Though my heart missed a beat just then, I tried to answer him calmly.

“You know perfectly well who I am,” I reminded him. “And you understand that I am making this journey to-night because I am to preach to-morrow morning and there is no other way to keep my appointment.”

He uttered a laugh which was a most unpleasant sound.

I slipped my hand into the satchel in my lap, and it touched my revolver. No touch of human fingers ever brought such comfort. With a deep breath of thanksgiving I drew it out and cocked it, and as I did so he recognized the sudden click.

“Here! What have you got there?” he snapped.

“I have a revolver,” I replied, as steadily as I could. “And it is cocked and aimed straight at your back. Now drive on. If you stop again, or speak, I’ll shoot you.”

For an instant or two he blustered.

Even as I spoke I felt my hair rise on my scalp with the horror of the moment, which seemed worse than any nightmare a woman could experience. But the man was conquered by the knowledge of the waiting, willing weapon just behind him. He laid his whip savagely on the backs of his horses and they responded with a leap that almost knocked me out of the wagon.

The rest of the night was a black terror I shall never forget. He did not speak again, nor stop, but I dared not relax my caution for an instant. Hour after hour crawled toward day, and still I sat in the unpierced darkness, the revolver ready. I knew he was inwardly raging, and that at any instant he might make a sudden jump and try to get the revolver away from me. I decided that at his slightest movement I must shoot. But dawn came at last, and just as its bluish light touched the dark tips of the pines we drove up to the log hotel in the settlement that was our destination. Here my driver spoke.

I sat still. Even yet I dared not trust him. Moreover, I was so stiff after my vigil that I was not sure I could move.

“You get down,” I directed, “and wake up the landlord. Bring him out here.”

He sullenly obeyed and aroused the hotel-owner, and when the latter appeared I climbed out of the wagon with some effort but without explanation.

I love books. When I was a kid, I’d spend my allowance on books, scanning the shelves weekly in a beloved used bookstore. I now have over 3,500 books in my bookcase-lined office.

I especially love my Oregon history books which ended up sparking the cozy mystery series, Murder by Words, set in a small Oregon Coastal town.